Divorce Can Be Wonderful

Divorcing a narcissistic psycho can be hell. If you’re not prepared.

She was. Read on:

I am in celebratory mood. Divorce can be a sad and stressful time for may people, but for this particular fruitloop it’s a cause for much celebration.

Just remember, you can’t divorce a narcissistic psycho because they won’t let you. Use reverse psychology. Apply for a divorce. Wait about 8 weeks before they slap an anti-suit injunction on you. Haha! that’s a good one, because they don’t want you to divorce them, they have to divorce you.

Be damn sure you have money to burn. I’m talking eye-wateringly, serious amounts of money that could be used for something far more constructive like your children’s education or your shrink bills. You’ll need the best lawyer you can afford. Firstly, because you have to deal with someone who is more cunning than a friggin weasel and has the charm of one of those guys who do tricks with a snake in a basket. You simply must have a lawyer who’s got teeth and balls. Frisk the bugger’s crotch and ask him to open his mouth. I’M SERIOUS. We all know though, that lawyers with a full set of teeth and mammoth balls don’t come cheap.

Secondly, remember… the psycho will always try to out-do you. They simply have to have the best lawyer. It’s a matter of entitlement. So, you can’t be caught with your pants down and relying on the legal skills of a toothless, impotent, eunuch when he wheels in the big guns.

Patience. Be prepared for the longest, most acrimonious, frustrating, expensive, divorce and settlement in f**ing  history. The narcissistic psycho will get these expensive lawyers to communicate about all possible minutiae from weekly letters regarding access to the dog, to a spreadsheet showing who owns the contents of the bloody refrigerator. I jest not!  Oh, and you’ll need to sort out that anti-suit injunction.

Keep your marbles intact. There will be times when you get to read and respond to their 100th solemnly sworn affidavit, and you’ll wonder if you’ve lost the plot.  These things are amazingly convincing works of fiction, and reading them will make you want to vomit…you’ll probably want to slit your wrists too!  DON’T. Sure, they’ll contain a grain of truth, but the truth will be so twisted that you’ll doubt your own sanity. Reach for the diary, the photographic evidence, the forensic accounting report and the bloody Valium….but keep your marbles intact.

When the decree absolute comes through, and he sends you a pompous message reading “I find it so very pleasing that I have finally stopped your divorce and divorced you” …….f**ing well CELEBRATE! You will be finally free of the bastard.

Today, I celebrated with a spot of fly posting around the village. This weekend I am having an enormous party.

BECAUSE DIVORCE IS EXPENSIVE….. BUT FREEDOM IS PRICELESS! 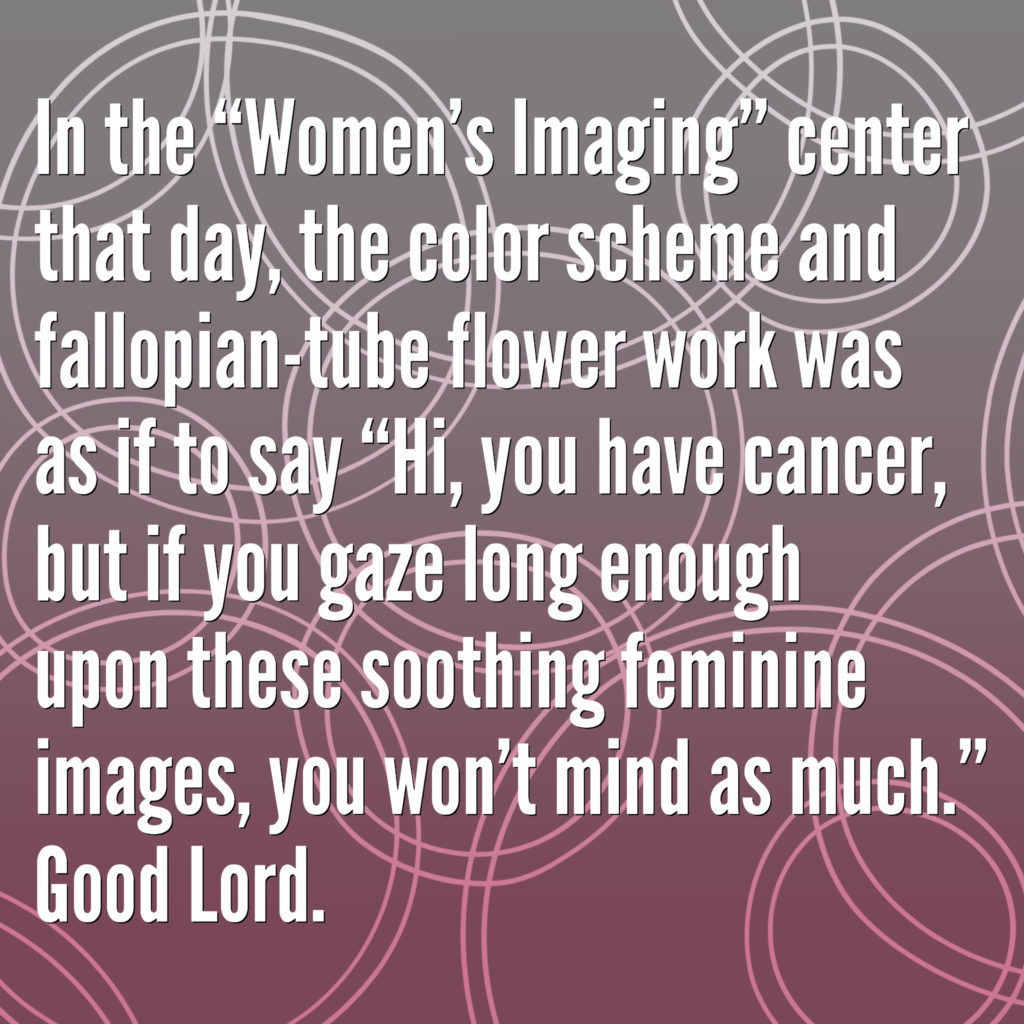 Nobody has ever said that pink walls and pastel artwork helps those with cancer cope.

Have you ever wondered who chooses the artwork hung in your doctors’ offices? The first time it occurred to me was when I had an ultrasound on my breast–having already been diagnosed with breast cancer (my daughter was 8 months old, my son was 3). The walls were pink, the paperwork was pink, the robes were pink. And on the walls held ungodly Georgia O’Keefe knock-offs. You know what I am talking about…the “blossoming flower” (wink wink).

In the “Women’s Imaging” center that day, the color scheme and fallopian-tube flower work was as if to say “Hi, you have cancer, but if you gaze long enough upon theses soothing feminine images, you won’t mind as much.”

Two months later, I visited my mother at the at a prominent cancer treatment facility 90 miles away. She had been diagnosed Stage IV colon cancer only a few weeks before my breast cancer diagnosis. I walked into a wide, long room hosting at least thirty patients in big, lazy-boy recliners. Each person was “under the bag” (cancer-speak for getting chemotherapy), faced toward the center of the room where sat the biggest fish tank I have ever seen. I mean, it was obscenely big—jutting out into the middle of the room in all of its aquatic resplendence like a big middle finger flipping off every cancer patient.

All of those people, their lives distilled down to hours spend under a chemo bag force-fed aquatic serenity—as if they were children in a pediatrician’s office—easily distracted by shiny bright objects floating in water. Something tells me not one of those people felt better about the fact they were getting chemo because they were looking at a fish.

When I stepped into one of the private rooms to see my mom she, too, reclined in a chemo chair—sick. A whisper of the woman she once was. And above her, one badly painted picture of…a lily pad. I went on over the next few months to my own cancer treatment. I took notice of the floor to ceiling photographic murals of “peaceful scenes” in my oncologists’ minuscule examination rooms.

When I lay down on the table my toes nearly touch the nose of a fuzzy bunny in a field in Exam Room 1; a doe grazing in the dew of a spring morning in Exam Room 3; or the tepid water of the pond holding LILY PADS. Right next to the medical chart of the female reproductive system is an 8foot x 8foot wall of LILY PADS!!!!!

I kid you not.

By this time I’m pretty sure these lily pads and fish tanks are some sort of secret code for kind of insurance we all have. Or portals into a fourth dimension. What is the art work like at HIV clinics, or pediatric cancer units, or prostate cancer centers? Thrusting erect shapes in dominant tones? Exactly how is someone else interpreting our fears for us and prescribing certain images to calm us?

I don’t know about you, but when I walk into my oncologist’s office I need to either see Lenny Kravitz working behind a Starbucks cart or Johnnie Depp, shirtless, handing out Valium if they want me to get my mind off of why I am there. Fish tanks, lily pads and Procrit squeeze balls key holders to the women’s room don’t cut it.

Can you imagine if every woman diagnosed with cancer walked into a doctor’s examination room and given paint and a blank wall? I doubt we would find one freaking lily pad…ever. What would you paint on your doctors’ walls? What would your mother have painted on the walls of her doctor’s offices?

And don’t get me started on the images for pregnant women…I have been a birth professional for nearly a decade, and I have NEVER seen a woman dilate more when gazing upon a protruding petunia.

Screw the pastels—we are women for god’s sake, stronger than any other element in nature.

I think we can handle primary colors.