Ask The Band: And Yet

So, I got my medicine adjusted like I said I was going to.

After a hilarious rigmarole of being referred to a doctor who only saw seniors, then one who only saw children, then one who didn’t take my insurance, I finally ended up with a really sweet doctor (who is the tiniest woman I’ve ever met).

She added another antidepressant to the one I was already taking, and it seems to have helped the symptoms in question – I’m still sleeping odd hours, but it’s only for 8-9 hours at a stretch, not 12-14, and my default state is “bored” instead of “bored and sad and mopey and lonely.”

(There’s always an “and yet” with mental illness isn’t there?)

And yet I’ve not managed to quite nail things down. I’ll stay up late without realizing how late it is, then sleep until 4 or 5 the next afternoon. The new medicine causes insomnia, so I was warned to only take it in the morning. But if I don’t take it when I wake up at 4 PM, then I’ll just sleep even more. If I do take it, I’ll be up all night and sleep late the next day. If I do manage to wake up early and take my medicine, I’m so tired that even the medicine can’t keep me up and I pass out around noon and wake up at 7 PM (which is what happened today).

I just want to wake up in the morning feeling at least somewhat rested and get tired at night being able to fall asleep. Since when is that such a massive thing to ask? If I could just do that AND have my medicine killing off the sadness and apathy, then all I’d have to do is muster up the motivation to do laundry and clean my room and make it look like a human being lives here!

To top it all off, I’m moving to North Carolina within the month. My best friend is moving back into her childhood home, which she inherited when her dad died, and she’s offered to let me live there rent-free if I cover half the bills. Her area has a much better economy than mine, so I could find a job more easily. And there are nearby schools where I could get either an associate’s or a second bachelor’s degree in the field I want to move into.

It’s too good an offer to refuse, so I’m cashing out my savings and heading up there as soon as she gets moved in and ready.

What if it all falls apart?

What if I can’t find a good psychiatrist nearby? I don’t even know what my insurance situation would be before I got a job.

What if I get on this same fucked up sleep schedule again and my room stays this messy and I’m awful to live with and she hates me?

What if I still don’t find a job and I burn through all my savings?

What if I get the degree, and take out a bunch of loans to do it, and still can’t find a job even then?

I don’t know. I was so sure for awhile this medicine had made things a lot better, but I sure don’t feel any less afraid.

Ask the Band: Grieving After Abuse

I was sexually abused as a child from age 5 to 8 by my babysitter’s son who was 10 yrs older than me.

I didn’t tell anyone until I was 10 and blocked the bulk of it out until college.

I just found out that the babysitter passed away earlier this week.

I don’t feel anything about her passing

I am sorry for her daughter and all of her grandkids. But there’s really nothing there. 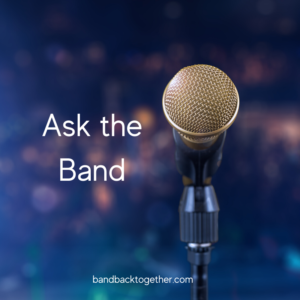