What Is An Abortion?

An abortion is a very common medical procedure that uses various methods to end an established pregnancy before birth, generally within the first twelve weeks of gestation. A medical abortion may be performed in a doctor’s office or at home. While it is a fairly taboo topic, it’s also a very common procedure: one in three women will have an abortion before the age of 45.

If you are pregnant, you should be aware of your options, including abortion. Deciding to have an abortion is a major decision with both emotional and psychological consequences.

If you are under age eighteen, your state may require one or both of your parents to give permission: Here is a state-by-state listing of abortion parental consent and notification laws.

What Is the Difference Between The Abortion Pill and Surgical Abortion?

1) The abortion pill or chemical abortion is an abortion that involves taking medication (Plan B, RU-486, and mifepristone or methotrexate along with misoprostol) to terminate a pregnancy and works up until 10 weeks gestation. Often known as “Plan B,” this medication is available over-the-counter at most pharmacies. This allows a woman to have an abortion at home.

It can take anywhere from a single day to four days after a woman takes the pills for the abortion to be complete. The length of time depends upon which medications are used (mifepristone generally takes less time than methotrexate).

During the chemical abortion, women will experience vaginal bleeding after the first drug is taken. The bleeding may be very light or like a heavy period. After the misoprostal is taken, cramping and bleeding begin – more cramping and bleeding than associated with a normal menstrual period. These cramps and clots should last several hours before the greyish gestational sac is passed. Most women take these drugs and expel the embryo at home, which means that she should be prepared for this. The clinic staff should provide guidance as to how to best prepare and what to expect.

If abdominal cramping or flu-like symptoms last greater than 24 hours, a woman should call her abortion provider. A menstrual cycle following a medical abortion may be longer or different than a normal menstrual cycle, but by the second cycle, the cycle should return to normal. 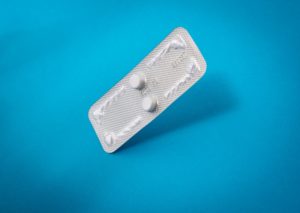 Serious Complications of the Abortion Pill:

Call your doctor IMMEDIATELY if you experience any of the following:

2) Surgical or In-Clinic Abortion is what most people think of as an abortion, in which a woman goes to a clinic and ends a pregnancy with the aid of medical doctors, nurses, and surgical anesthesia. A surgical abortion works by emptying the uterus with special instruments. Planned Parenthood provides additional information regarding surgical abortions here.

Surgical or In-Clinic Abortion is an option for terminating a pregnancy. The cervix is gradually opened with tapered rods, until it is wide enough for a cannula to fit through. A cannula attached to some sort of suction machine is inserted into the cervix and the contents of the uterus are emptied by suction. This type of abortion is highly effective and completed within minutes. It allows for sedation, can be used in early pregnancy and generally requires only one visit to the provider.

There are two types of in-clinic abortion procedures. Common Problems After an In-Clinic Abortion:

Call your doctor IMMEDIATELY if you experience any of the following:

Why Do Women Choose To Have Abortions?

Many anti-abortion groups claim that having an abortion increases a woman’s risk for developing breast cancer and endangers future childbearing. These groups claim that women who have had abortions without complications are more likely to experience infertility, become unable to carry a pregnancy to term, develop ectopic pregnancies, deliver stillborn babies, or become sterile. This propaganda is designed to make a pregnant woman carry their pregnancy to term and can cause severe guilt, anger, fear, and other emotional reactions in pregnant women who may consider abortions.

These claims have been refuted by a significant amount of medical research.

It is also worth noting that having an abortion does not make you a bad person, weak, stupid, or wrong – you must do what is right for you with each pregnancy. Don’t let anyone else tell you how you should feel.

There are some things women can do to lower their risks for post-abortion complications. The first way to reduce complications is to have the abortion early. Generally speaking, the earlier the abortion occurs, the safer.Asking questions about the procedure, what to expect and what to do to prepare, is really important.

Later-Term Abortions: Because earlier abortions are less complicated, they are typically safer than later-term abortions. It is important that any woman seeking an abortion do so as soon as possible. However, there are compelling reasons that a woman would have a later-term abortion.

Emotional Issues After an Abortion:

While most people feel relief after having an abortion, it’s completely normal to feel other emotions, too. Women choose to have abortions for many reasons, but generally it is because pregnancy is, at that time, wrong for them. Even if abortion were the best option for the woman, it’s normal for emotions, post-abortion, to be all over the place. Many women feel regret, shame, guilt, sadness and anger.

Some women feel comforted by talking to a friend, family member or counselor about their abortion. Feelings of loss resulting from a lack of support by someone close shouldn’t be confused with regret about having an abortion. Most women, while having many conflicting emotions, report that their feelings are manageable.

If you are feeling any of these emotions and find them interfering with your ability to carry on your daily duties, please seek help from a doctor or therapist. You can also contact Exhale, an after-abortion talk-line. How Much Does An Abortion Cost?

Contact the National Abortion Federation to see if you qualify for a loan or financial assistance for an elective abortion: 1-800-772-9100

How Do I Find An Abortion Provider?

Planned Parenthood also has an abortion clinic locator with over 800 locations around the country.

Exhale is an after-abortion talk-line that serves women who have abortions and their partners, friends, and family. They respect all various cultural, social, and religious beliefs.

National Abortion Federation: For unbiased information about abortion and other resources, including financial assistance, call toll-free:  1-800-772-9100

Planned Parenthood is the leading source for abortion and reproductive health information.

Exhale is an after-abortion support site. It’s confidential and serves those who have had abortions or their friends, families, and partners.

National Abortion Federation: The National Abortion Federation (NAF) is the professional association of abortion providers in North America. They believe that women should be trusted to make private medical decisions in consultation with their health care providers. NAF currently offers quality training and services to abortion providers and unbiased information and referral services to women.