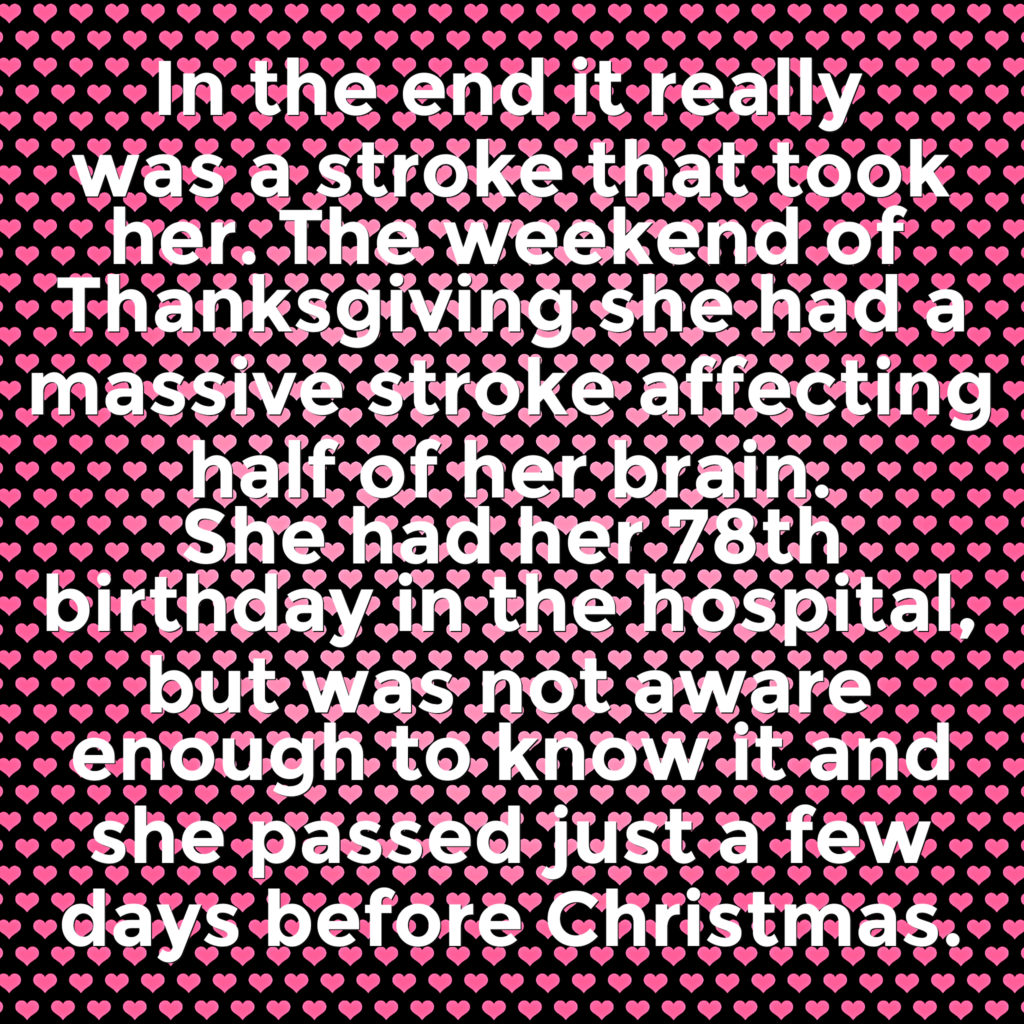 Growing old is optional, growing old gracefully even more so.

My mom did not have it easy in the last 5 years of her life.  Her first problem was with her sciatic nerve, which first caused pain then weakness in her legs and eventually left her dependence on a wheelchair. I tried to keep in mind that she was in pain, scared and unsure during the times when she seemed to be going the extra mile to be as difficult as possible, but I wasn’t always successful.

After my father passed (Mom went just 4 yrs later), my mother became a shut-in.  This was pretty much by choice.  We lived 4.5 hrs apart, I’m an only child and we have no relatives who still speak to us living nearby. She refused to consider moving and her house looked liked something you’d see on “Hoarders,” but that’s yet another story. She wanted to live completely independent of help, especially mine, because this was the first time in her life that she was on her own, so I think she wanted to prove to herself that she could.

Did I mention “shut-in?”

She was defiant, she was determined to be independent and she was lying…I had a 74-year old teenager on my hands.

She ordered food through Amway. She bought her clothes via catalogs. She banked via the mail. She had a few friends who would come over and check on her most days, but the situation was far from ideal. Her mind was not the best, but she was sharp enough to lie to me about anything that didn’t show her situation in the best of lights.

For instance, she never told me about the time she fell and had to call the neighbors to help her up.  She never told me about the time, in a very confused state, she called 911 in the middle of the night because -best I can piece together- she had a dirty diaper and was having trouble changing it herself.  The cops busted the front door open and were not at all pleased to find her in no actual danger.

She did tell me about the time she called 911 for a ride to her doctor’s appointment, only because she felt a grave injustice was being done. Something had happened with her scheduled special needs ride, and she reasoned that if the doctor needed to see her then she needed to take an ambulance. She had received a bill for $700 for that non-emergency ride and didn’t think she should have to pay it. I did talk her into paying the bill, hoping she’d learn her lesson.

I tried mentioning the idea of assisted living, but she wouldn’t hear it.

“They beat you and lock you in your room!” she screamed. Eventually, I convinced her to get some in-home elder care and a woman would come by three times a week for three hours at a time to cook, clean, and run errands for her. Finally, I could get the low-down on her condition from someone who would be honest with me.

This started out well, as Mom enjoyed having someone to talk to and she was now getting fresh, home-cooked meals instead of the packaged crap she ordered via the mail.  But, it didn’t last.  I got a call from the coordinator to tell me my mom was hitting the workers.  She was also being verbally abusive.  At one point, Mom chased a worker out of the house, screaming at her from the front door.

I got emails from a friend of Mom’s who had visited her, only to find her crying hysterically, saying “I hate my life!” and hitting herself in the head. When asked about it the next day, Mom acted surprised and said nothing like that had happened.

Then, Mom came down with a bad cold that required someone to stay with her while she was ill.  The elder care folks were great and worked out schedules so that she was tended 24/7 until she got better. Problem was, despite appearing to hate these helpers, once Mom got better, she didn’t want the 24/7 visitation to end.  In fact, now she was refusing to let them leave. I’d have been fine with the additional help, but we could not afford the $10,000 per month for very long.

I had to talk with Mom and tell her it had to stop. This did not go well, and there were tears, but in the end, she cut back to 1 visitation, 5 days per week.

The pain and weakness in her leg was getting worse, and it was spreading to the other leg.  We talked to a number of doctors, but she didn’t like most of them and liked even less what they had to say.  Finally, after yet another fall that she still would not admit to, she was in the hospital again.  Her doctor convinced her to have back surgery, and at last she agreed.  She was hell on wheels both pre- and post-surgery.  She had a fear of falling that was off the charts.

When the nurses tried to move her in the bed, or, heaven forbid, try to get her to stand up, she’d scream. I’m talking hear-her-down-the-hallway screaming.  I’d leave the room and stand outside biting back tears whenever anyone tried to work with her.

When she was well enough to leave the hospital, she went to a rehab facility to help her get back on her feet as much as possible. It was there that some medical genius, who I’d kiss on the lips today, put her on anti-depressants (yeah, I know, “what took so freakin’ long?!” – she refused them before because she didn’t want to “take dope”).  Mom became a bit more reasonable and a little easier to deal with.  More like heck-on-wheels.  When I asked her why they put her on the happy pills, she said “so I’d stop screaming.”

During rehab, her doctor spoke with me, informing me that she could not live on her own. Preaching to the choir, sir. So, through hook, crook and threats of Adult Protective services, I got her to agree to move “temporarily” to an Assisted Living facility near me.  I found a really nice place a mile from my home and they assured me that the beatings would be kept to a minimum. (Joke!)

We moved some of her favorite things up and set up her two-room apartment to look really nice and homey. When she got out of the hospital we drove her straight to her new home.  Despite hearing how horrible it was, we watched her start to enjoy life again.  She was making friends and playing Bingo every day.  God forbid you came by during Bingo hours, only did THAT once.

Mom *loved* the call buzzer and actually wore the one by her bed out, because she used it so much.  She still managed to keep things lively.  I got a call from her one Easter morning, telling me she couldn’t move her leg and perhaps she had had a stroke. “Should I go to the hospital?”  Well, the normal answer would be “Hell YES!” but I had learned to ask.  “Why didn’t the nurse call the ambulance for you?” I ask. Mom said that they wanted her to check with me first.  None of this was adding up, so I told her I’d be right over.  When I got there she was wheeling around her room, fully dressed and looking fine.  I asked which leg it was that she could not move.  “This one!” she said, bouncing the leg up and down.

Her behavior continued to become more erratic, and I got a call that I never thought I’d get.  Mom was flashing her boobs at the male help and at some poor, unsuspecting wheelchair repairman.  Oy.  A doctor was brought in and a diagnosis of dementia was made.  This only pissed her off.  She accused the facility and the doctor of telling horrible lies about her. “I’d never do that!” she yelled.

In the end it really was a stroke that took her.  The weekend of Thanksgiving she had a massive stroke affecting half of her brain.  She had her 78th birthday in the hospital, but was not aware enough to know it and she passed just a few days before Christmas.

I’m still working on cleaning out the house, but it is getting close to being done.  I avoid driving by the assisted living place, still too many bad memories. I can laugh about Mom flashing the help. It’s two years later and I’m finally getting to the point that I don’t jump when the phone rings.

Growing old gracefully is optional, for sure.