So it’s time to Band Back Together for Birth Defects. Share your stories. Tell your tales. We need to learn about the birth defects that have touched YOUR life. Let’s rock out and tell the world OUR stories.

It’s YOUR turn, The Band!

I’ve only ever lurked on Band Back Together, but I feel like I need to tell my daughter’s story.

The pregnancy itself wasn’t bad, just the normal aches, pains, and nausea. Emotionally it was tough – there were issues found on ultrasounds, and my OB felt like it was her duty to present the worst-case scenario every time we spoke. I decided that if we had to hear bad news, I wanted it to be delivered by someone who was kind and knowledgeable, so we switched doctors and started seeing a maternal-fetal specialist.

He told us that there would be kidney issues when she was born, but nothing emergent.

My water broke 2 days before my due date. I had a good, quick labor. There was meconium in the amniotic fluid, but otherwise it went well. She was born just after midnight, with good Apgar scores. She weighed nearly nine pounds! She had no interest in nursing, and she wasn’t into the formula they offered, either. A couple hours later, her blood sugar started to drop, and then she stopped breathing. They took her to the NICU for observation. I’d worked a full day before my water broke, so by the time they took her away I had been awake for almost 24 hours. I was sent to a recovery room without my baby. 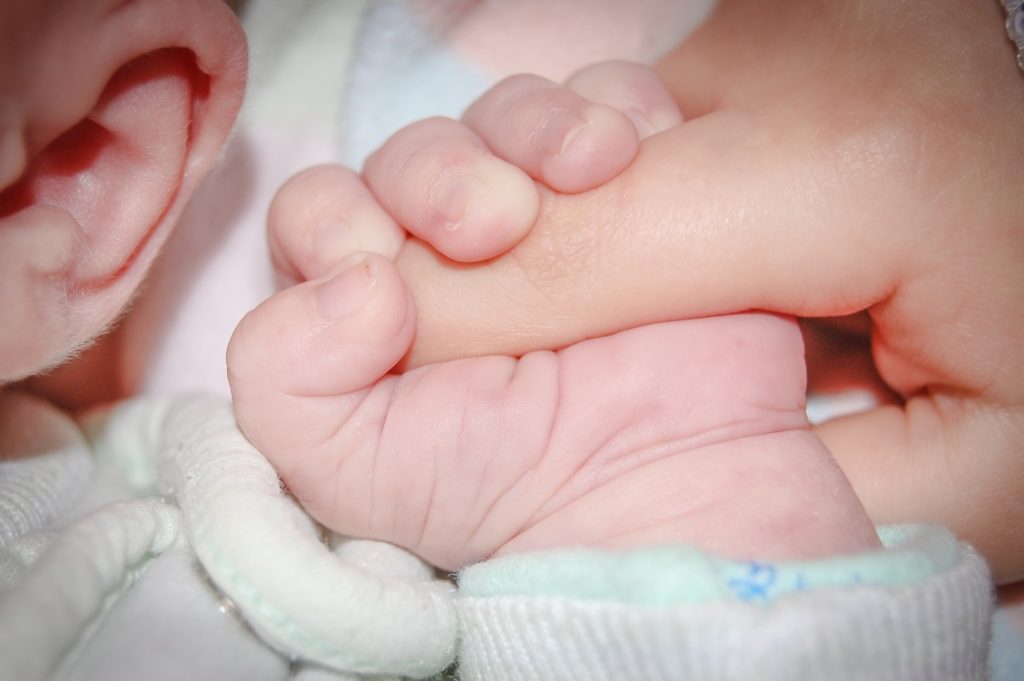 That day and the next are a blur. This was my first child, and I had no idea what to expect from a normal birth or a brand new baby. I only knew that this was not what I expected. I alternated between recovering in my room and sitting with my daughter in the NICU. She would barely take any food and kept even less down. There were multiple doctors coming in and out and multiple tests being done – blood draws, x-rays, upper and lower GI, etc.

Finally they determined that she had intestinal malrotation. That means her intestines were jumbled and twisted and not anchored in any way. If untreated or undiscovered, it quickly damages the bowels and then leads to death, essentially by starvation. Surgery was set for Friday night, the same time that I was to be released. I had no choice but to hand over my 3-day old baby to be intubated and placed under general anesthesia so that a surgeon could cut open and rearrange her guts.

My husband, my mom, my mother-in-law, and a close friend were with me during the surgery. Around midnight, the surgery was finally complete. They would only allow 2 people in the room with her at a time, so I stayed there while everyone else took turns coming in to see her. I can’t even describe how it felt to see the 3-inch incision across her tiny little belly. She had wires and tubes everywhere, and we were not allowed to hold her. I could tell she was in pain – when on a ventilator, the vocal cords don’t make noise, but I could see her screaming.

My mom and dear friend knew what kind of comfort I needed – they just held me and murmured words of consolation while I tried in vain to keep it together. My mother-in-law was not so in tune with what I needed – she wanted to touch her, and exclaim over her, and it was all just too much for me. I was completely helpless and broken. I had my husband make everyone leave, and then I left, too. I left my silently screaming baby in the care of total strangers, Band. At that moment, I was certain that the nurses could do more for her than I could. Now, when I look back, I am unable to forgive myself for leaving her.

That night turned out to be the beginning of a long journey. She had 2 more surgeries and lots more testing; we found out that she has a genetic anomaly that seemed to be the cause of her birth defects. She was 9 weeks old when we were finally allowed to take her home – just a few days after my first Mother’s Day.

My daughter is now almost 3 years old. She has very low muscle tone and is still quite delayed, and she is a beautiful, happy, easygoing little girl. She wears her battle scars with no complaint, and despite my failings, she loves me completely.

She is my ray of sunshine.