Life With a Hoarder

Not an actual picture of author’s home…

I live with a hoarder.

Our apartment is not Hoarders level bad, but it could get there easily if I allowed it to. I don’t allow it to because clutter triggers my anxiety.

This pandemic has been hell on my hoarding-related anxiety and on my depression.

I know, on an academic level, why people hoard things. I even have a very good guess as to the reasons behind my husband’s hoarding. But knowing the why doesn’t help; it doesn’t ease my anxiety, it doesn’t make me more empathetic… I think it actually makes me even more frustrated and depressed.

This is one way that having a psychology degree can be a double-edged sword. The knowledge is helpful when you’re looking at the behavior of someone you don’t know. But when it’s someone you live with and you have emotional ties to, it feels like it makes things worse.

The hoarding is a major anxiety trigger for me. It’s limited to his “office”, but sometimes, it seeps out into the rest of the apartment. My husband has this nasty habit of setting things down “for now”, but never picking them back up.  I refuse to pick it up. In my mind, my justification is that I didn’t put it there, he did. I shouldn’t have to be picking up after a grown man. So then it sits.

As I type this, I’m looking at a pile of cardboard that needs to go out of the recycling. I look at it and I am seething, both at him and at myself. I’m seething at him for just piling it up and not taking some of it down with him to the dumpster when he took out the trash. I seethe at myself for being so overwhelmed by a pile of cardboard that I freeze when I think about having to haul it out by myself.

I’m resentful. I resent being the one who has to clean. I resent having to tiptoe around his anxiety because if I don’t, then he becomes passive-aggressive and tries to emotionally manipulate me and make me out to be the bad guy because I expect him to help me keep a clean house. Then I start keeping score.

I shouldn’t be keeping score, but I can’t help it. I feel like I carry more of the weight around here and do 90% of the emotional labor in this relationship. This comes from my past; I grew up in an abusive household where I was both scapegoat and maid. I had to clean the whole house while my father sat on his ass and ordered me around. I feel a lot like this now. Except I’m an adult and I don’t live in fear of my husband if I refuse to do it.

I try to clean, but I feel like it’s a losing battle. It’s also becoming very difficult for me to keep pushing on and on. I clean up, but he brings in more crap and sets it down, never to pick it up again.

I think I might be at the end of my rope. Actually, I think I’m hanging on to a thread as far as the hoarding is concerned. I’ve contemplated going into that room and just getting rid of everything that I think is garbage. I’ve even considered ratting out my husband to the landlord as a wake-up call. I’m mortified at the thought of maintenance or the landlord coming in and seeing that room. 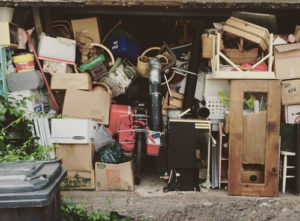 Again, not a picture of the author’s actual garage…

I’m not even going to get into how our rented garage looks. That does look like an episode of Hoarders. I’m angry that we pay extra a month to rent a garage to house all the crap he brought home and never used.  We need to clean it out, but I’m both overwhelmed at the idea of how much stuff is in there. I’m also mortified at having to open the garage door and having everyone see how bad it is.

I could go to therapy, but the issue here is that I don’t want to tolerate this hoard anymore. I’ve lived with it too long and I feel like I’m enabling him by not saying anything. I’m hanging onto that last frayed strand of rope. I’ve lived with it long enough. I don’t have the time nor the patience to live with all the physical crap. I don’t have the luxury of waiting until he admits that he has a problem and gets help for it. If this makes me sound cold, then so be it. I have to think of myself. This is wreaking havoc on my anxiety and my depression. I don’t want to end up having another nervous breakdown and spending a week in a behavioral health facility because my anxiety and depression have reached the levels of suicidal ideation again.

Don’t laugh. The last time this happened, it was because the idea of going to work triggered panic attacks and I felt like such a failure that I began thinking about suicide.

I have few ways to escape since the pandemic started. I feel trapped, both by a virus and by someone else’s physical crap and emotional issues he refuses to deal with. I’m exhausted, too. I feel like a failure because I can’t keep my house clean. Short of staging an intervention, I don’t know what else to do.