If you are a friend, you’ve no doubt heard me refer to the young Prince and my daughter, Sam. You may not have heard me discuss My Dude, who will be 20.

This left his mark on each of our souls in this family; they say when one person has a disease, the entire family is sick. (Whoever the hell “they” are, that’s about the only thing “they” ever got right.)

He also left his marks on our house. Walls written on, slammed doors, the broken dishes. They’re really silly little things in the grand scope of things, when you consider how many times we’ve had to start over: house floods, hurricanes. When his lows were so low and the anger beast would rage out of his fists and into the walls, nothing was safe. 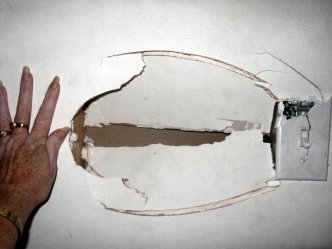 The upstairs was covered with signs of his anger.

For years, the holes would multiply, weekly, monthly, until eventually, I learned it was silly to fix them because they would come back, bigger, with more vengeance.

So we stopped. We stopped fixing the holes, we focused on simply surviving the best we could. We made horribly hard choices that parents shouldn’t have to make.  He grew bigger, stronger, and his disease became more pronounced while he became increasingly distant.

Two years ago this week, what little was left of my world crashed down.

My Sam-I-am, left for the university; she’s my only daughter, my first born, my best friend, the first thing I had ever done right, and my biggest confidant. I wanted her to escape the madness, to spread her wings and go, but the selfish child in me wanted my friend, my baby, my daughter to stay. Two weeks before she left, I received a medical diagnosis that I kept secret for three weeks so she would go, as she’s the kind of girl who would give up her life to stay behind and help.

The diagnosis was so shocking, the amount of research was mind boggling while coping and adjusting our lives and goals around it.  But we did.  A couple months later, Dude had a break down, freak out, and then he left.

I have spent one and a half years without him, though he did briefly return twice. It didn’t go well either time, and both times he left on bad terms. Once, after a physical altercation with me.

Every night I go to bed not knowing where my son is, if he has eaten, if he is safe, if he is alive. When my phone rings from another state or an unknown number in the middle of the night, chills run up my spine and I feel like I will vomit, as I prepare for that phone call that no parent wants. Because I don’t know. I beg him to get to a doctor. A hospital. A police station. A shelter. Anywhere.

He’s never had a job. He’s never driven a car.  He receives no welfare, no medicaid, no anything, he’s not a drain on your tax dollar, but does have mental illness and he is walking around this country. How has he survived? I have no idea.  He is good looking, very good looking. He’s also very smart, and a great con man. I love him dearly but I’m not looking at the world through rose-colored glasses.  I wouldn’t want anyone to cross his path because honestly I have no clue what he is capable of: he hasn’t been on medication for over a year and I can’t legally make him take any, as he is an adult.

So for this past year and a half, when I don’t hear from him for a week or longer, and I worry, or I get a call of him just talking crazy I can sit on my stairs and run my hand over that hole in the wall and try to absorb some of his pain. Because I am his Mom. It’s my job. Kiss the booboo, make it all better, right?

But, I can’t. I have never been able to make it all better. He goes from loving me to wanting me dead in one deep breath. So I leave the holes in the wall to remind me of his pain, to remind me of how I can’t fix him, how I can’t help him. All I can do is love him, remember that he is real, even if he isn’t here.

Over the last three weeks he was calling 10-15 times a day, and full of tiger blood and all grandiose, like Charlie Sheen. For some reason the stars lined up and a guy who did drywall came by, so I hired him and paid him. My dad went in the hospital last Friday. I spent the entire day in the emergency room until he was admitted. I got home and at midnight I got a call from another State that my Dude had been picked up, they wanted to know about his mental health and he had asked them to call me. I had to say horrible things about him, to strangers, who think I that am a mother who doesn’t love her son. What they don’t know is I love him enough to say those things so they will get him help.

In a strange twist of fate. The law being what it is, I can’t find out if they have my son, if he is alive, where he is, how he is. Nothing. Tomorrow will make six days since I have had an update and it’s eating at me, yet I have to go on, with work and life and baseball games for the Prince, Sam-I-am turns 22 on the 11th and graduates on the 13th. Still, I know nothing about my Dude. I kick out jokes, posts, tweets, pictures, but why isn’t my phone ringing, DAMN IT? I am his mother, I need to know he’s okay.

I went to the stairs today, put my hand on the wall where the drywall had been fixed. I just sat on there and felt I couldn’t have betrayed him more if I had tried. I’m so sorry, Honey. I hope one day you will understand that I love you to beyond the universe and back.