I Am Completely Broken

91% of victims of rape and sexual assault are female, and nine percent are male.

Sexual assault can utterly change everything about who you are.

I am completely broken.

Bold statement, I know, but hear my story and you will understand. (to be clear) I don’t need pity, nor do I want to be saved. Understanding, though, never hurts.

I’ve always taken a liking to academia; I was a natural scholar who skipped the first grade. I had art published in the local newspaper when I was, say, five years old. It was a serviceman in rainbow camo gear holding the American flag, if anyone was curious.

I’d say that was my peak.

I was in third grade when the bullying started – the other kids even dedicated a song to me on the playground! How lucky, right? I was pudgy, I suppose; the fattest kid in the class, fat enough to be the ‘chosen one.’ I cried every single time I went shopping with my mom and sister. I begged that I’d cease to exist, ‘so no one has to worry about me’ –direct quote. This continued for years – seven to be exact.

At least you’re noticed in elementary and middle school. Maybe I wasn’t noticed for a good reason, but I was noticed. I played sports throughout junior high, always had a perfect GPA, I had plenty of friends, and a decent social life. But I was The Friend, not The Girlfriend. I remember during a Halloween dance, I literally begged a boy to tell me why he didn’t like me. He simply walked away and asked my best friend to be his girlfriend. I wasn’t mad; I accepted it.

High school was when the shit hit the fan.

My first two years of high school, I was really involved in class office, never running for a position because I knew the prettier and thinner girls would win. It’s high school, ya know?

I accepted squeezing in wherever I was allowed to. I wasn’t bullied much, but I was ignored. Sometimes, I preferred it. Don’t get me wrong, I had great friends but I was always chasing the fun, chasing the social scene.
Sophomore year I had my first taste of alcohol and weed. I loved it. It felt great to have a secret, something behind the backs of my straight-laced, God-fearing friends. Soon, though, my friends didn’t like me. I remember sitting alone at a table in the library, my old friends at the table next to me, ignoring me. I begged them to tell me why they didn’t like me anymore; they shrugged and walked off.

I transferred schools to a dual enrollment program.

Oh, did I mention I had ballooned up to 250 pounds? Yep. My weight was largely ignored, not discussed, and accepted. But I got sick of it, so I lost the weight – worked out constantly and methodically, eating like a champion.

By the time I got to my new school, I was thirty pounds lighter and thought I was hot shit. I smoked a lot of weed, drove around in my new car with my hip friends, and smoked cigarettes. I even got my first kiss—so what if it was my best friend’s boyfriend? I got it, and I liked it.

I craved male attention and I entered into this ‘I deserve it’ mode. I thought I owed myself a treat, and boy did I get it.

December 8, 2007. Fall semester, senior year, I was golden. There was a new guy every day that wanted me; I dangled myself in front of them like a piece of meat, but I never gave an inch. Not because I didn’t want to, but I was too nervous. With about three kisses under my belt, I was CLUELESS. 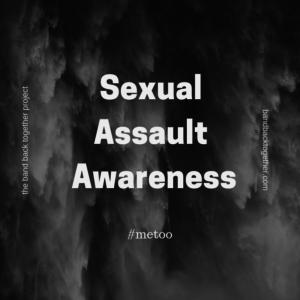 But yes, back to that date. That’s when it all went to shit.

I went to the beach with a few people where we drank a lot of whiskey or rum. I remember the initial vomit hump—you know when you gotta puke once to get the ball rolling? I remember looking up to see his face, and I know, looking back, what he was doing. I hear the brain blocks on memories you can’t handle, and thank goodness for that.

I lost my cell phone and my virginity that night. I didn’t even realize it until I went back the next day, saw the condom wrapper, and pieced it together. I quickly covered it with sand so my mom wouldn’t be upset.
Oh, fun fact: in my attempt to go home, I went to a ‘friend’s’ house to ask for help—in the weeks following, I asked him about it, and he said I wanted it just as badly as he did – that I came on to him.

I figured it wasn’t worth it – that I, for some reason, didn’t deserve normalcy. So I went with it, like I went with everything. I made it out to be funny, I buried it deep and far away. I joked about myself – called myself every name in the book. I don’t even know how many people I’ve slept with since that time.

Then I met Zach.

Junior year of college, my first year in the dorms, I was nineteen years old. I always had a blast in college – my philosophy was “why think about bad stuff when you can think about the good?”

Zach was special – still is in my book. He had a long-term girlfriend and he hooked up with my roommate, while seeing me in between. I felt special for no reason. Through “healing” from my rape, I learned that I could have anyone I wanted. I knew how to talk and look and walk to get what I wanted. All I needed was a kiss: one kiss in the elevator of my dormitory sealed the deal. I was in love. He made me feel pure and real; like I deserved more.

This was the first time I realized how important and delicate sex was. I learned what making love was. I no longer made fun of romantic movies or songs; I felt the scenes and I listened to the lyrics and understood. We made love and cried, and it wasn’t corny or cheesy, it was real. And it was amazing. It was the first time I ever said ‘I love you’ to someone. When you experience that for the first time, it’s amazing. You feel important, you know someone is important to you.

I didn’t care about anything but playing “house” with him in my dorm. His dad hated me, my mom hated him, but it didn’t matter; we were in love and it was amazing. I’ll always miss that blissful month. I felt real for the first time in my life.

We moved in together when school let out in the spring. It got bad – screaming, crying, and covering it up with sex. I’ll leave out these details, but it was a textbook abusive relationship, on both our ends. We broke up the day before my fourth year of university started.

I’ve been numb since.

I’ve fucked many, kissed more, and drank a lot of alcohol. I feel empty. I quit going to class, and sat in my apartment for days in the dark, just smoking pot and sitting there. Sometimes, I’d sit for a few hours in complete silence, staring at nothing. I had no motivation – I couldn’t get up out of bed, I didn’t want to shower or brush my teeth or hair. I didn’t want anything in life. I didn’t want life. Every time I drove over a bridge, I struggled not to jerk my wheel just so I could breathe again.

Like I said, I am completely broken. I’m a cliché. Fat kid in desperate need of love and acceptance. Rape victim throwing caution to the wind and delving into a world of drugs and promiscuity. ‘That girl’ who can’t get over her ex. The typical depressed person who lives through every symptom you read on the internet. Smart kid desiring acceptance ends up failing classes due to active social life.

I am completely broken.