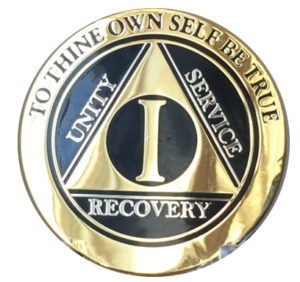 On January 4th of 2020, I picked up my One Year Chip. How awesome that was. And in a stretch of ego, how proud I was of myself. Yes, I know I didn’t do it alone, but I was still proud of myself for not giving into the craving, especially early on.

So, I picked up my chip and all was so good in my world. February came and I was still on that pink cloud, vowing to never step off of it – hell, my sponsor said I never had to if I didn’t want to, so why would I?

Then came March, and we all know what March brought. For me, it brought a little more unknown than I was ready for. But I have a program and a higher power, and I was going to be okay. My meetings shut down, but we all found Zoom and again I knew it would be okay.

April got a little harder. I was diagnosed with Covid on April 9th. I was lucky and able to manage my symptoms at home. One thing that was becoming more and more evident, though, was that I was starting to miss my fellowship – the Zoom meetings weren’t quite filling the void anymore. Plus, I had been laid off on March 16th, so I was living in an isolation I knew would be NO good for me. But I was still okay. I leaned on my higher power hard, but He’s got broad shoulders. Then came May.

May was gonna be good. We got back to work on the 13th and although it wasn’t as busy as it needed to be, it would pick up. I just knew it would. And although Covid was ripping through the world, I could stay busy with work and feel some normalcy.

Side Note: I live in South Carolina and masks weren’t much of a thing here until quite recently. So we eventually became a “hot spot”, made the national news – the works. And as Bill would say when sharing his story… “And then it got worse.”

My mom had always lived independently. At 77 she was the neighbor who took all her neighbors to doctor appointments, the pharmacy, grocery store; whatever they needed. On May 20th mom was doing what she does – taking a neighbor to a doctor appointment. Except that after dropping off her friend, she disappeared. Just like that. We searched and searched, checked parking lots of nearby doctor offices, hospital parking lots, made all the phone calls, and yielded nothing. We checked her apartment for clues, and that’s where we found that her wallet with all her money, credit cards, and license were still there. As was her cell phone. Mom disappeared and had no money or ID or way to call or be called. That’s when I started to feel a serious WTF feeling.

In the meantime, I had filed a missing person report here with the police department. Besides walking in the rooms of A.A., that was the smartest thing I’ve done.  All told my mom was missing a total of 26 hours. She was found at about 1:30 on the 21st, in Virginia. I may have forgotten to mention my mom lives here in SC too. She was pulled over by a police officer for driving with her hazards on. The officer here in SC who filed the missing persons immediately put mom on the NCIC, so her license plate dinged as soon as the officer in Virginia ran it. Maybe that’s procedure, I don’t know, but I’m grateful he did that. Beyond grateful.

**At this point I’d like to point out again that mom had no ID or money. I have no idea where she spent that 26 hours because the trip to Virginia from here is 4, maybe 5 hours. This troubled me for weeks, but she doesn’t remember any of it, so that right there is some Grace of God stuff, and I chose to let that go** 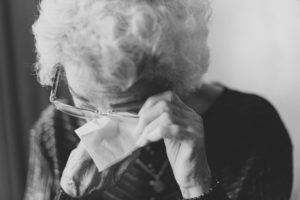 Mom had no idea where she was, how she’d gotten there, or why she’d gone there. She was belligerent with the officer and he brought her to the hospital for evaluation. That hospital was less than helpful. As a matter of fact, for a minute I thought about legal charges against them, but knew I could not afford to pursue litigation against them. So, I let it go. Mom wasn’t hurt by them; she just wasn’t helped.

That Thursday we were ready to head back to South Carolina, but it was too much to drive so we decided to get a room. I had to stay up all night long at that hotel because mom kept trying to leave the room… that was a long night. We came back home the next morning and I will spare too much of that story; let’s just say that immediately upon returning home I brought mom to the hospital here, where she was admitted and stayed for what ended up being a week. There I found out mom had developed a bad UTI which brought on an early onset of dementia. That explained her previously inexplicable trip to Virginia and her subsequent behaviors.

About the 4th day in the hospital, it became obvious that once the UTI had cleared up mom wasn’t much better. That dementia wasn’t just going to go away. What was worse though was because she wasn’t “medically” in need any longer, the hospital wanted her gone. Every day they would tell me she needed to be released. I had no idea what the hell I was supposed to do with her! She certainly couldn’t live alone anymore and if she stayed with me, I’d have to quit my job and probably never sleep again for fear she’d sneak out of my house. None of those were viable option, I was so lost. Suddenly I’m the caregiver with absolutely no clue what my next steps were. Medicare, Medicaid – I knew nothing, but I was about to get a crash course.

Again, I’ll spare you all the details, but I found a place for mom to be transferred to while I tried to figure the Medicaid/Medicare piece out. It’s a lovely assisted living that is costing me $2000 a month. I cannot sustain that for much longer before I bankrupt myself. To make matters worse, this assisted living facility (I have very recently learned) doesn’t accept Medicaid payments. As a matter of fact, there’s one place that covers most of the eastern seaboard of South Carolina for Medicaid assisted living residents. It’s an hour away and NO ONE is taking what they refer to as “community transfers” due to Covid. So, for now, mom has to stay there while I try to figure out how old is too old to become a prostitute…

So, for now, mom is where she is and she’s safe. She’s as mean as a rattlesnake every time I see her, she even told me she wished she had killed me when she had the chance. Yes, I know she has a disease and doesn’t always know what she saying, but I can promise you that doesn’t make it hurt any less. But I’m all she’s got and I don’t get another mom, so it is what it is.

My sobriety has taken quite a hit, but it’s still intact. Year 2 of sobriety has thrown a shit ton of curve balls at me and I’m trying to learn when to swing and when to let em go by. I’m getting better at it. I got to go to an in-person meeting last night – first one since early March. It was glorious. I have been missing my “people” so much. Way more than I realized.

I’m sure there’s a lot I left out, maybe forgot, but I’m finally beginning to realize what some of our slogans mean. Living Life on Life’s Terms isn’t for pansies. One Day at A Time is something I’m having trouble with these days, but my people smack me in the back of the head with it when I need it. Also when I need it, they’re here for me. You’re here for me. That’s amazing and I hope to never take that for granted.

Back to my journey. Thanks for listening 😊